It has been 12 fun filled, nauseating, exhausting, food aversion and craving filled weeks since my last blog update. Surprise!! 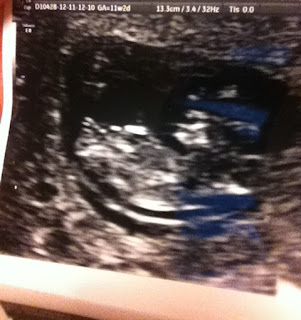 In other news....there is no other news. There's a BAAAAABBBYYYYYY in my belly!! We are thrilled, and when Korban realizes what's going on, I'm sure he'll be thrilled too :) Much like my last pregnancy, I have REDIC food cravings, combined with obnoxious aversions roughly five seconds after considering the craving, leading to lots of leftovers and ginoooormous grocery bills. Hopefully that calms the heck down this trimester. School is the farthest thing from my mind, but it's still simmering away on the back burner. I'm maintaining my GPA, and hoooope I can keep it up by the end of the semester. I'm enjoying (read: rolling my eyes through) my sociology class and leaning on every bit of medical curiosity I've accumulated over the years in my A&P class. Somewhat terrifying fact: I have barely skimmed my A&P chapters due to sheer exhaustion and limited brain CPU's and have aced every test so far. This is because I was raised by a physician and used to read the Physician's Desk Reference and Pediatrics Quarterly for fun. Additionally I took a few weeks of Latin 10 years ago, and these things added to my fondness for reading medical blogs have given me enough of a prefix base to figure out most of the questions. That, and it's open book. Anyway, this means that theoretically it is possible to ace A&P without any real working knowledge of human anatomy and physiology. I'll try not to think of that next time I'm in the hospital.

Anyway, here's the best meal I've made in weeks.

Orecchiette with Broccoli Rabe and Sausage

Add the pasta to the boiling water, stir gently, and cook until al dente (one minute less than the cooking time on the box recommends).

While the pasta is cooking, put the evoo, garlic, and hot pepper flakes in a large skillet. [Important: I Never mince garlic, just chop it, but there REALLY was a taste difference in using minced garlic. I'm sure this isn't news to the rest of the world, but it was news to me! So, throw yourself some gerlics in the Cuisinart and buzz em for a few seconds.] Remove the sausage from its casing, if it has any, and add it to the cold skillet. Warm over moderately low heat, breaking up the sausage with a fork, and cook it until the sausage loses its pinkness. Add the broccoli rabe and season with salt to taste. Stir to coat it with the oil and seasonings.

Set aside one cup of the pasta water, then drain the pasta and return it to the warm pot over low heat. Add the sauce and toss well, adding some of the pasta water if it's too dry. Serve immediately with cheese if desired! It. is. sensational. My picky almost-two-year-old had two servings, as did my husband, my baby in utero, and myself. My mom only had one, that bastion of self control, she!

P.S. Regarding my last post about Weight Watchers - that was the FIRST call homegirl made after telling family about the new baby. There was never a subscriber happier to cancel. See you in a year, suckerssssss!!

Posted by Chelsea Bucci at 9:21 PM